The establishment of Lyallpur Museum was started in 2010 and it was completed in 2013. The history and culture of different areas of Sandal Bar are preserved in it. Sandal Bar highlights the historical importance of area between River Ravi and Chenab. LYALLPUR MUSEUM consists of ten different galleries. In these galleries all objects are displayed in order.

After passing through the main entrance, you will see the first gallery of Lyallpur Museum. The different periods of history are depicted on a wall through mural which itself tells the historic and cultural story from stone-age to Lyallpur’s historical building called Gumti. Different geographical maps are also displayed in this gallery. The map of the World, Pakistan, Punjab and Faisalabad division, district, cities and towns are displayed in a sequence. An aerial view of Faisalabad city is also part of this gallery.

From the start, the valuable samples of the rocks with reference to Sandal Bar geological importance are displayed. In this gallery, Flora and Fauna, local culture through model of Village, Tribal games and Mysticism are displayed aesthetically. There are over 350 species of birds of this area. There are some stuffed birds which are entertaining the viewers. Representation of Doabs and Bars and imagery view of River Ravi and River Chenab are important subject of this gallery which is justifying with its title SANDAL BAR GALLERY.

The archaeological heritage gallery encompasses artefacts from Stone Age period to Sultanate period. Seventy eight archaeological sites and monuments are displayed through photographs on ceramic tiles which were documented by Punjab survey in 1994-1995. Carving models of Chiniot, Ceramics of ancient era, Beads and Coins are kept for exhibition. Most importantly, this gallery displays the artefacts from Shorkot Mound, the Gandhara art of Buddhism, and the antiquities from world’s renowned Indus Valley Civilization. An old “Kachawa” are also placed in it, which was used for valuable trade in ancient times. The most notable bronze Cauldron with Sanskrit (Brahmic) Inscription on its shoulder, which found from Shorkot is also the part of display.

In the fourth gallery of museum, an attractive model of SULTAN BAHU Tomb and the architectural parts of ancient monuments with beautiful designs are exhibited. Manuscripts of Mughal period, metal wares, Papier Mache objects and Lacquer work on wood, different war weapons of British and Sikh periods are also displayed. The photos which tells the story of Sandal Bar. There are also photographs reflecting folk tales of this area.

In this gallery, Lower Chenab Colony, Railway and Canal system which were made in British period are shown with the help of a big map. Photographs of Chiniot Railway Bridge can be seen in this gallery. Before Lyallpur, this area was known as “Pakka Marri”. English government made Chenab colony on four acres. There is also a model and map of lower Chenab colony in this gallery which explains the initial stages of this colony.

In this gallery the ancient maps, land contracts, development phases of Lyallpur, housing, planning, notifications, documents and initial settlements of Lyallpur, which were made in British era, are displayed. The maps of Faisalabad from British period to up till now, are also presented with the historical images of different castes and their dresses.

This gallery tells the history of different old professions. Goldsmith, Blacksmith and potter tools are exhibited. The photographs of important personalities from various professions, who are associated with Sandal bar are displayed. There is also a view of local and ancient mountain of Shahkot, where a lion and a goat miraculously come to drink water. Old dresses, old utensils and Bhagat Singh corner is also a part of this gallery. The model of Qaisari Gate is also a part of this gallery which was made in the memory of Queen Victoria.

The introduction of Faisalabad is incomplete without mentioning the textile industry. The different handmade traditional textile objects are displayed in this gallery. The textile tools like spinning wheel, carding gin, rolling manual machine, carpet making small model and Khadi and specimens of woven cloths are displayed to demonstrate ancient traditions of textile industry.

The photographs of leaders who participated in Pakistan Movement are exhibited in this gallery. The Arfa Kareem’s (youngest Microsoft certified, Fatima Jinnah Gold Medalist) collections are the prominent part of this gallery. The model of Arches of Independence from the office of All India Muslim League Montgomery Bazar Lyallpur where Quaid-i-Azam visited in 1942 is displayed in this gallery. 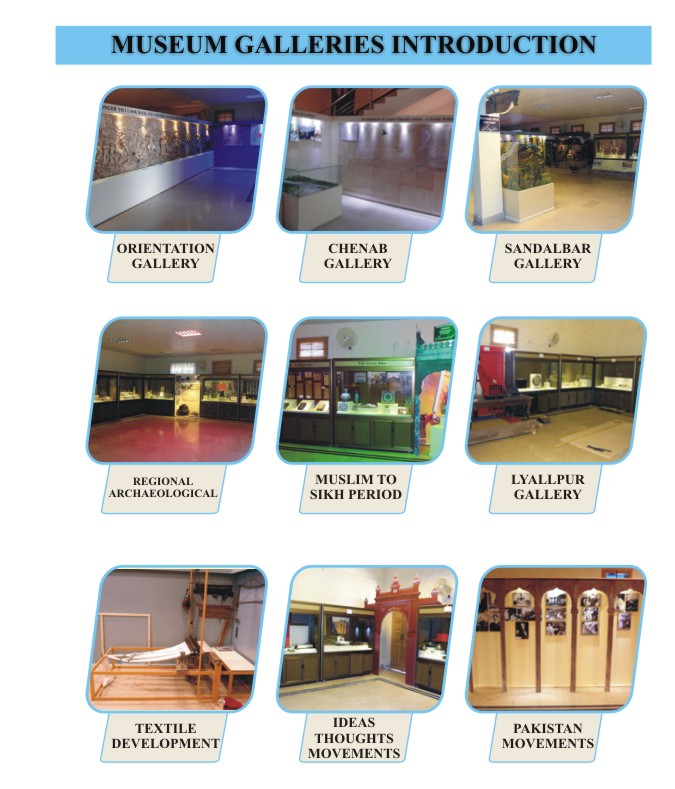