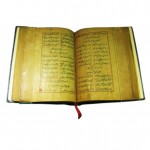 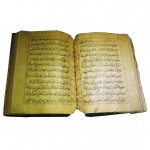 Calligraphy (from Ancient Greek: "beauty" and "writing") is a visual art related to writing. It is the design and execution of lettering with a broad tip instrument or brush in one stroke (as opposed to built up lettering, in which the letters are drawn) A contemporary definition of calligraphic practice is "the art of giving form to signs in an expressive, harmonious, and skillful manner"

Modern calligraphy ranges from functional inscriptions and designs to fine-art pieces where the letters may or may not or may not be legible.[1] Classical calligraphy differs from typography and non-classical hand-lettering, though a calligrapher may practice both.

Calligraphy continues to flourish in the forms of wedding and event invitations, font design and typography, original hand-lettered logo design, religious art, announcements, graphic design and commissioned calligraphic art, cut stone inscriptions, and memorial documents. It is also used for props and moving images for film and television, testimonials, birth and death certificates, maps, and other works involving writing. Some of the finest works of modern calligraphy are charters and letters patent issued by monarchs and officers of state in various countries.

no images were found